We are conducting research on super-large scale integration (SLSI), which is the foundation for energy applications. Recently, tremendous technological advances have been made in SLSIs, which serve as fundamental components in the electronics and information science fields, and they have attracted wide attention for their essential role in realizing an advanced information-communication society. This field focuses on energy conservation for ultimately contributing to the solving of environmental problems on a global scale. We are also researching topics in anticipation of the coming ubiquitous information society, such as applications of non-volatile memory technology to logic LSI chips, material devices featuring new functions and structures, and circuit design.

Ferroelectric memory (FeRAM) features an extremely low power consumption, even among non-volatile memory types. However, issues such as stacking density and cost still remain. We are working to resolve these issues through multi-valued technology that includes multi-bits and multi-levels using multiple polarized states of a ferroelectric hysteresis system (Fig. 1). Based on this work, we are proposing new types of multi-recordable multi-storaged 1T/1C FeRAM and are designing and evaluating functional memory applying this research (Fig. 2). 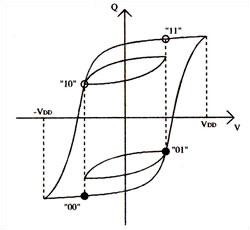 In non-volatile multi-valued memory, large differences arise in the power consumption for writing due to multilevel encoding. Therefore, we have proposed algorithms that adjust the code usage rate of the entire data by applying run-length encoding.Simulation results of power consumption and adding data capacity using various sampling data indicate that increasing random data by only 14% can reduce power consumption by up to 33% and can improve reliability by up to 44%.